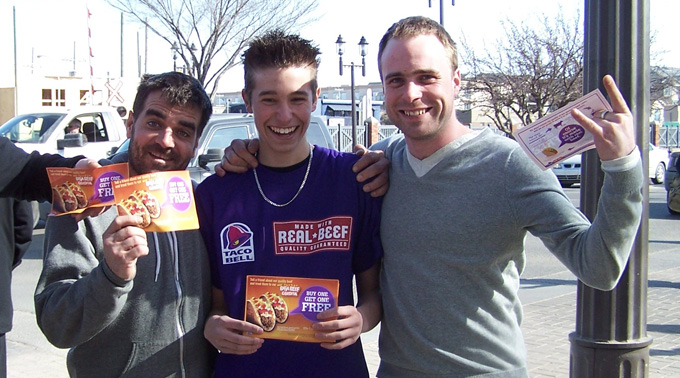 In six cities across Canada, our team hit the streets to bring awareness to the great offer brought on by Taco Bell – free tacos for a week! Consumers were intercepted during their daily routines on campus, in malls and those just out for a stroll with a takeaway promoting the offer as well as explaining the process Taco Bell uses in the kitchen. A two-for-one Baja Beef Gordita was also offered to consumers.

Taco Bell has faced some negative PR as of late and wanted to reposition their brand image in the consumers’ eye. Free Taco Week is not only a great way to put a positive light on their company, it also gives Canadians the opportunity to taste their real beef.

Our presence was seen in Calgary, Edmonton, Ottawa, Toronto, Waterloo and Winnipeg, but free tacos were available nationally. Taco Bell also took advantage of our exclusive Video Shirts as our team made a greater impact with consumers as they could view the television ad.

And if you did not catch our team in action – of course it’s made with real beef!