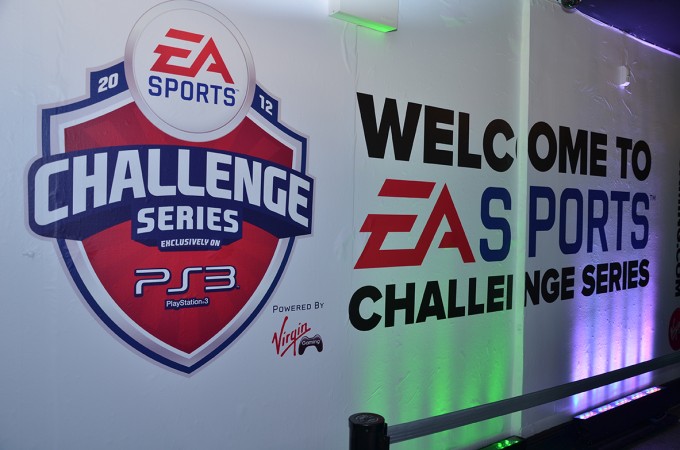 On April 28, 2012, Splash MM took over Terminal 5 in New York City to execute the EA Sports Challenge Series powered by Virgin Gaming, the largest sports gaming tournament in North America which was played exclusively on PlayStation 3.

The Splash MM Team completely transformed the venue into a virtual sports stadium providing everything from the ideation of the event, venue build out, tournament execution and management, production, staffing, sound, lighting and gaming stations right through to the live performance from Hip-Hop star JADAKISS to end the event with a bang! The venue had a real sports stadium feel complete with an athlete’s tunnel, over 150 gaming stations and even a giant scoreboard hanging from the rafters.

By the time the doors opened for registration there were nearly 2500 gamers and spectators lined up all the way to the Hudson River  eagerly awaiting their chance to play Madden, FIFA or NHL and win their piece of the $1,000,000 prize pool! After signing in they were greeted by the gorgeous Splash Girls dressed as EA Sports Cheerleaders, Maxim Girls and NOS Girls as they headed down the gamer’s tunnel and into the 3-level gaming stadium completely built out with hundreds of PS3 consoles, HD televisions, interactive gaming stations, Sponsor Activations, luxurious VIP areas and a massive 200 Sq Ft HD Screen on the main stage hanging above the Championship gaming station featuring a Dream Seat stadium seating build flanking a Sony 65” 3D TV.

As the tournament kicked off, the best sports gaming competitors in the world took to their first round games with each station being run by professional gaming referees provided by Splash MM. As the day progressed and the action heated up, the gamers were supplied with energy drink samples provided by NOS, the official energy drink of the tournament. NOS cans were being distributed by the lovely NOS Girls throughout the venue as well as on the rooftop terrace where a tailgate party was underway featuring DJ Reflex Le Roque on the turntable, with games and competitions being played for cash
prizes.

Back inside, the tournament field continued to narrow down to the final few competitors, many of whom were taking advantage of their last chance to fine tune their skills at one of the luxury interactive gaming stations in the PlayStation Lounge as well as the many PlayStation Interactive kiosks installed throughout Terminal 5. Entertainment for the spectators was at full throttle right into the night with the beautiful cheerleaders dancing on the main stage to DJ Reflex Laroque and later to Just Blaze while mini-games were being played for awesome prizes such as PS Vitas and Gunnar Optiks Glasses. The amazing live performance by Jadakiss halted the gaming action as the 2000 in attendance took a timeout to enjoy the set and get psyched up for the finals of NHL, FIFA and Madden which were extremely intense and were broadcast on the Jumbotron as well as throughout the venue so that everyone in attendance could engage in the action
and to see who took home the big money prizes.

The EA Challenge Series powered by Virgin Gaming was a fantastic event and Splash MM would like to thank Virgin Gaming, EA Sports, PlayStation and all of the event sponsors for awarding us the opportunity to take a huge bite of the Big Apple!!!