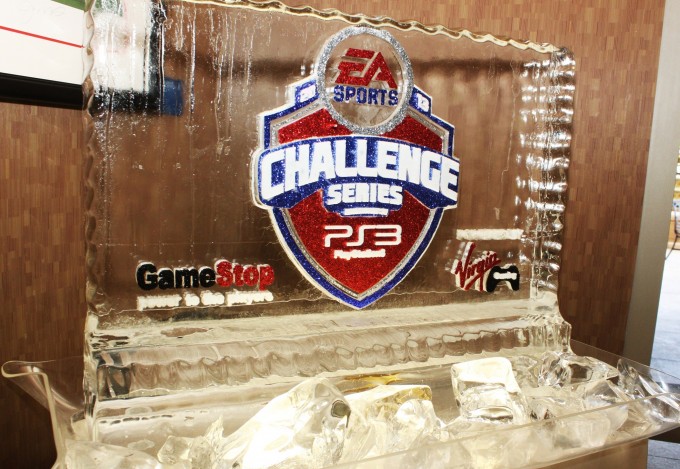 The 2nd Annual EA Sports Challenge Series, Powered by Virgin Gaming, where the best sports gamers from around the world battled for their stake of the $1,000,000 prize! This year the spectacular event played exclusively on PS3, was held at Legasse’s Stadium inside the Palazzo Hotel, Las Vegas, Nevada!

Splash MM returned this year to ensure that the event was just as amazing as the inaugural tournament held last April in New York City. There were over 50 Splashers on hand to guarantee that the tournament ran without a glitch. Guests were entertained by our energetic EA cheerleaders, the integrity of the tournament was upheld by EA referees, and gamers stayed refreshed and alert with our very own, very beautiful, NOS girls handing out plenty of ice cold NOS, the official energy drink of Virgin Gaming. Players, guests and VIP were also welcome to take a break from the action and demo some new merchandise in one of the lounge areas sponsored by PlayStation and EA Sports, which were all liaised by Splash MM models.

As the top players in the world fought their way through their respective single elimination brackets in FIFA 13, Madden 13 and NHL 13, Gamespot broadcast the games through a live stream for the duration of the tournament. This year’s venue allowed the last rounds of the tournament to funnel into the luxurious stadium seating area where the final 32 players were put under even more pressure, as they played directly under the spotlight of the live crowd. All gaming stations in this section were hooked up with EA/Monster Headphones which may have helped players focus and drown out distractions from the crowd. All three championship games were easily visible for all to see on the massive main screen which spans 16 feet across and 9 feet high!

Splash MM would like to thank Virgin Gaming, EA Sports, PlayStation and all the sponsors for asking us to come to Las Vegas and help produce such an amazing, successful event in the Entertainment Capital of the World!